It’s officially Halloween, one of the most awaited nights in the world. At Cavendish School of English, we wondered how Halloween is celebrated in different parts of the planet, so we asked our international students and multicultural staff. This is what we found out. 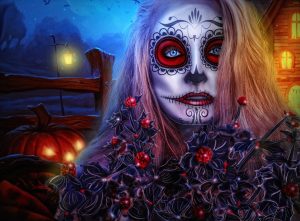 There are lots of European countries, like Spain, Poland and Portugal, where people celebrate this day by bringing flowers and candles to cemeteries. It is a way to remember friends or family who have passed away. In Mexico, they go one step further and have food and a small party around the crypts to honour their dearly departed.

Romania has the most terrifying house in the whole world: Dracula’s Castle. It’s said that if you go in you can hear weird noises  and experience strange smells. The tradition over there is to visit the castle at midnight. Would you be brave enough to do it? In Germany, they decorate the most gloomy places and oldest castles, like Burg Frankenstein, which is more than one thousand years old. Spooky!

As you probably know, Halloween is one of the most popular festivals in the USA and their celebration is the best known and most influential in the whole world. Scary costumes, make up, pumpkins, creepy decorations, zombies, witches and children everywhere in fancy dress asking for sweets around the neighbourhood. 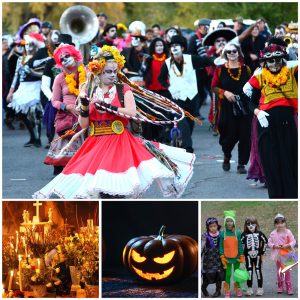 There are some places in the world where “Halloween” is celebrated in a different month. For example, in China people celebrate a festival called qing ming jie / 清明节 around May. Apparently, one of the activities that takes place on that day is to visit cemeteries. Once there, Chinese families burn some special paper in honour of their deceased ancestors. As a general rule, this paper is a replica of money, but you can see a variety of figures on the paper.

In Nepal, the festival is celebrated in August – September. It comes from Hinduism, where the cow is a sacred animal that guides deceased people on their journey to the beyond. That’s why there’s a procession in which cows march through the streets. These days, this event is a carnival far removed from the terrifying and macabre, as the streets are filled with colour, music, flowers and all kind of activities and expressions of art.

Did you know all of this about Halloween? Do you know any other traditions related to this festival? Wherever you are reading this article, we hope you have a very scary Halloween. Have a good one!

This website uses cookies to improve your experience while you navigate through the website. Out of these cookies, the cookies that are categorized as necessary are stored on your browser as they are essential for the working of basic functionalities of the website. We also use third-party cookies that help us analyze and understand how you use this website. These cookies will be stored in your browser only with your consent. You also have the option to opt-out of these cookies. But opting out of some of these cookies may have an effect on your browsing experience.
Necessary Always Enabled
Necessary cookies are absolutely essential for the website to function properly. This category only includes cookies that ensures basic functionalities and security features of the website. These cookies do not store any personal information.
Non-necessary
Any cookies that may not be particularly necessary for the website to function and is used specifically to collect user personal data via analytics, ads, other embedded contents are termed as non-necessary cookies. It is mandatory to procure user consent prior to running these cookies on your website.
SAVE & ACCEPT